Several Accumulators Plumbed and Mounted Together.

Rules for Construction of Pressure Vessels.

Units of pressure, equal to 100 kilopascals or approximately 14.5 psi. 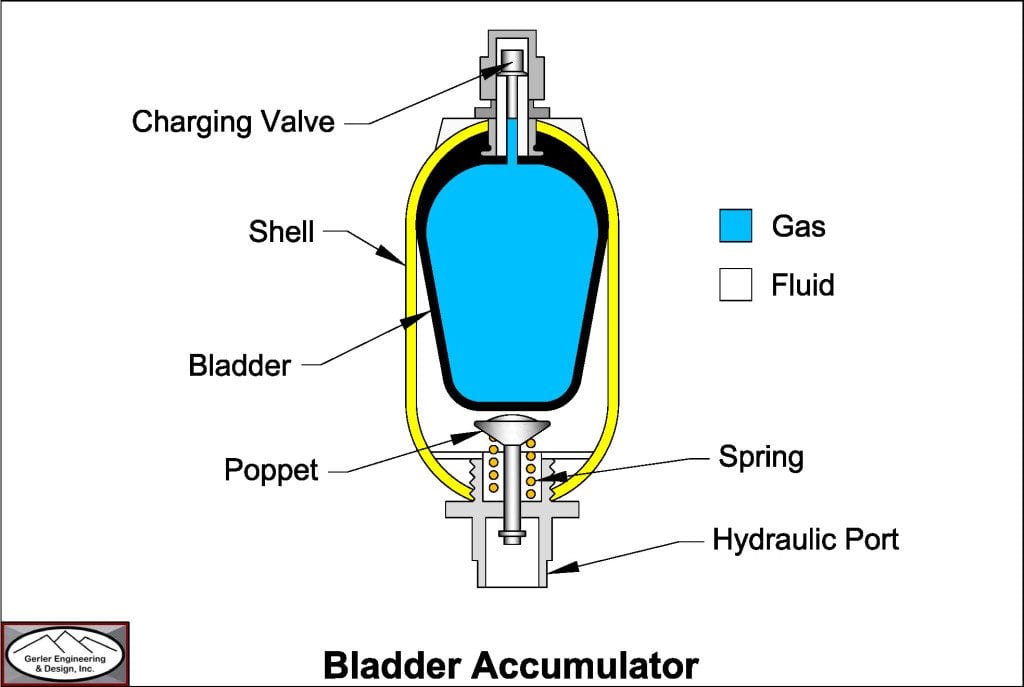 A steel vessel or series of steel vessels used exclusively for high pressure gas storage, used in conjunction with other accumulator vessels. 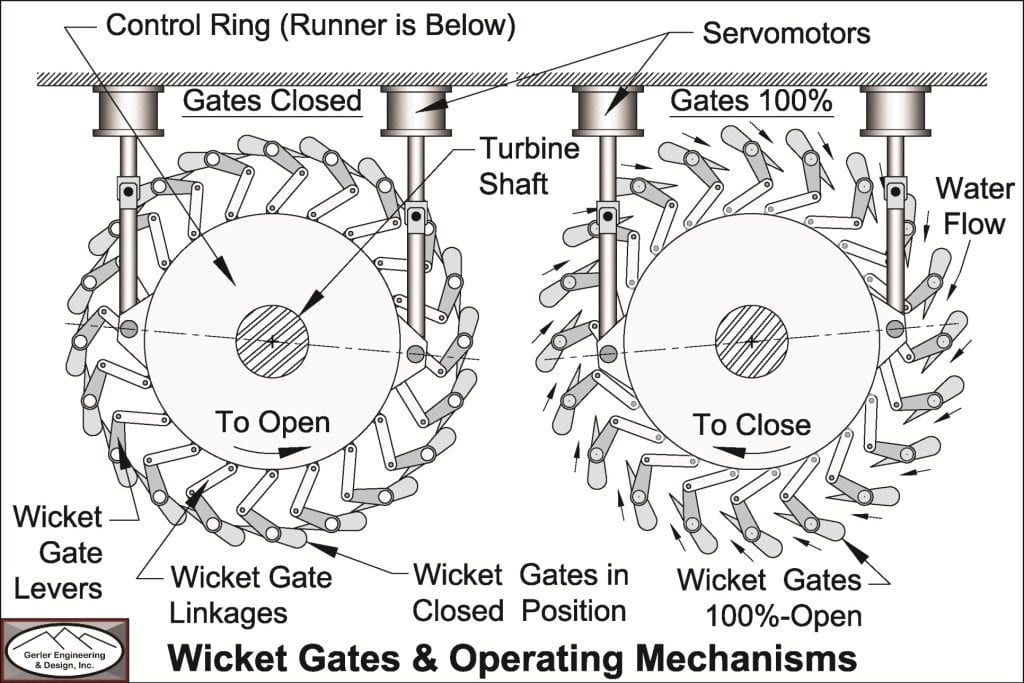 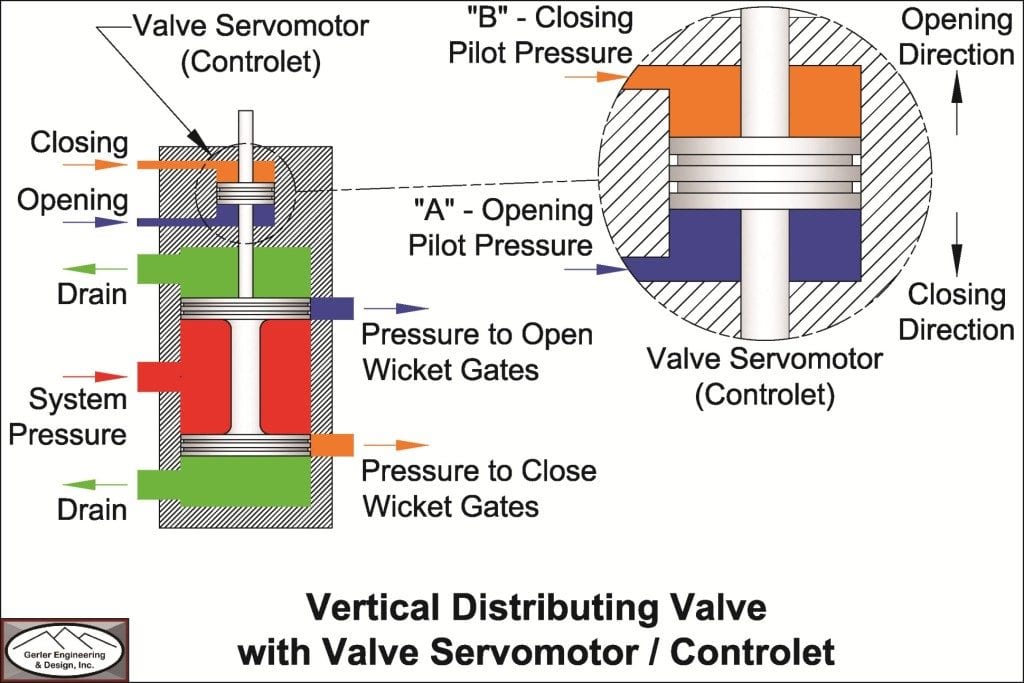 A Deflector, is typically fitted at the discharge of each Impulse Turbine Nozzle and it’s function is to cut into the water stream exiting the Nozzle, preventing the water from reaching the Buckets of the Impulse Turbine Runner. The Deflector is a quick-response water control device, whereas the Needle Valve is a slower acting water control device.
See also Hydraulic Turbine – Pelton Style Turbine.

A PLC based Digital Controller that includes Governor functions as well as other functions that may be considered Unit Control or Plant Control functions by traditional definitions of Hydro Turbine Governor Systems.

A Discrete-Acting Hydraulic Valve (i.e. bang-bang valve), commonly solenoid actuated. May also be manually operated by hand, pilot operated by oil pressure, or by various other methods. Used to operate an auxiliary actuator, or other device, by connecting it to system pressure and drain, as required by the particular application.

With respect to Hydraulic Distributing Valve operation, Dither is a small-amplitude, controlled oscillation of the Hydraulic Distributing Valve Spool. Dither is employed so the Distributing Valve Spool is continuously in motion. This ensures that it is always influenced by the effects of Dynamic Friction, rather than the more significant effects of Static Friction. Without Dither, the Control System could behave erratically. Dither is induced by superimposing a small sine wave signal on top of the Control Current Signal. The resulting Dither can be observed as an oscillation in the LVDT Position Feedback Signal.

A Draft Tube collects the water discharged by the Runner in Reaction-Type Turbines and delivers the water to the Tail Water, or Tail Race.

A Duplex Oil Pump control scheme whereby the Oil Pumps automatically alternate the Lead Pump and Lag Pump duties. This is commonly done to even the wear over time on the two (2) Oil Pumps Assemblies.

A Duplex Oil Pump control scheme whereby pumps are staged to start at two different pressures, the Lead Pressure – higher pressure and Lag Pressure – lower pressure. The two (2) Governor Oil Pumps are generally turned off at the same pressure, the Maximum Normal System Pressure. The Lead Pump, which starts at the higher pressure is often sufficient to restore the Maximum Normal System Pressure by itself. The Lead Pump therefore assumes the majority of the operating time and wear. The Lag Pump is turned on at a lower pressure and it is needed less often than the Lead Pump, so it accumulates less operating time and wear.

Feedforward is a function that feeds the Process Setpoint directly through the Integrator Term of a PID Controller to allow Setpoint changes that are independent of the Controller Tuning.

The Hydro Turbine Gateshaft Wicket Gate Operating System is a design commonly seen on Hydro Turbine units produced primarily in the first half of the 20th century. The Control Ring of a Gateshaft-Design Francis Turbine is not connected directly to the Servomotor. The Wicket Gate Control Ring is rotated by links connected to a large Gateshaft. The Gateshaft reaches some distance, often to a different floor of the powerhouse, where it is rotationally actuated by a Servomotor, through a lever affixed to the Gateshaft.

In some parts of the world, Guide Vane is a term used in place of the term Wicket Gate. Guide Vane is also occasionally used in conversation to mean Stay Vane.

Head is a measurement of the Difference in Elevation between the Head Water Reservoir and the Hydraulic Turbine – a distance dimension. Typical units are feet or meters.

The Hydraulic Power Unit (HPU), is comprised of the Oil Pumps, the means for driving them, the Oil Sump Tank, and the associated accessory devices. 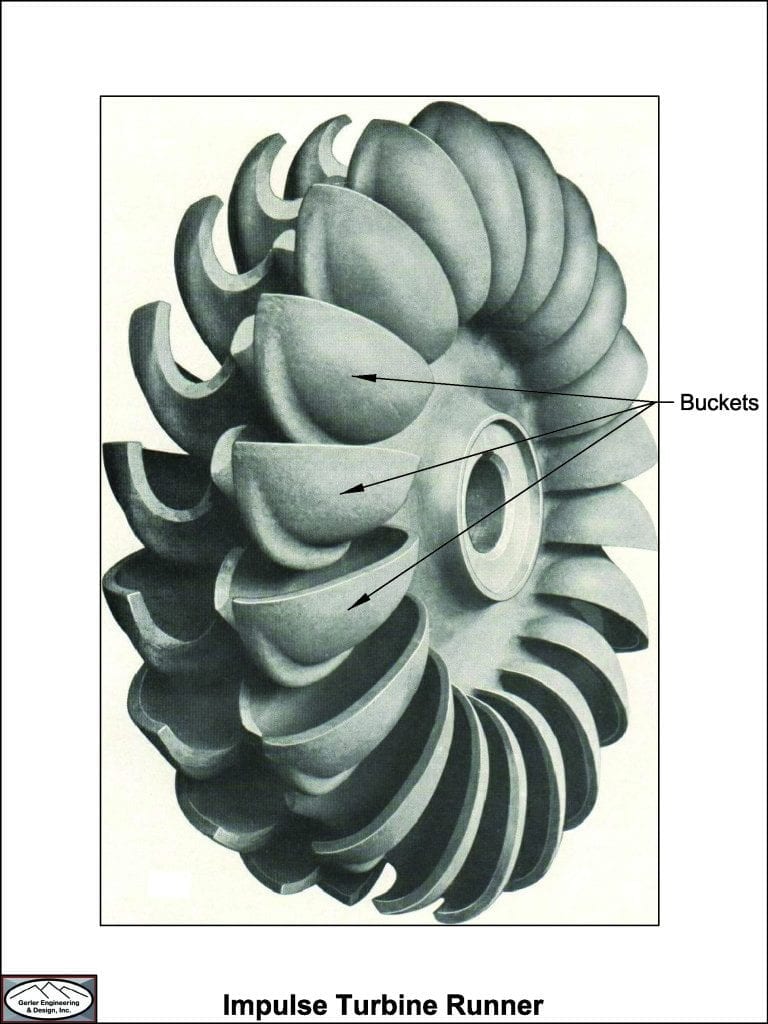 A Bulb Style Turbine is a Reaction-Type and is essentially a Kaplan Style Turbine with a horizontal shaft. The generator and the shaft between the turbine and generator are housed in a steel case, which is submerged in the flowing water. The Runner is external to the steel case and typically located on the downstream end of the case. In this configuration Bulb Turbine resembles a submarine. 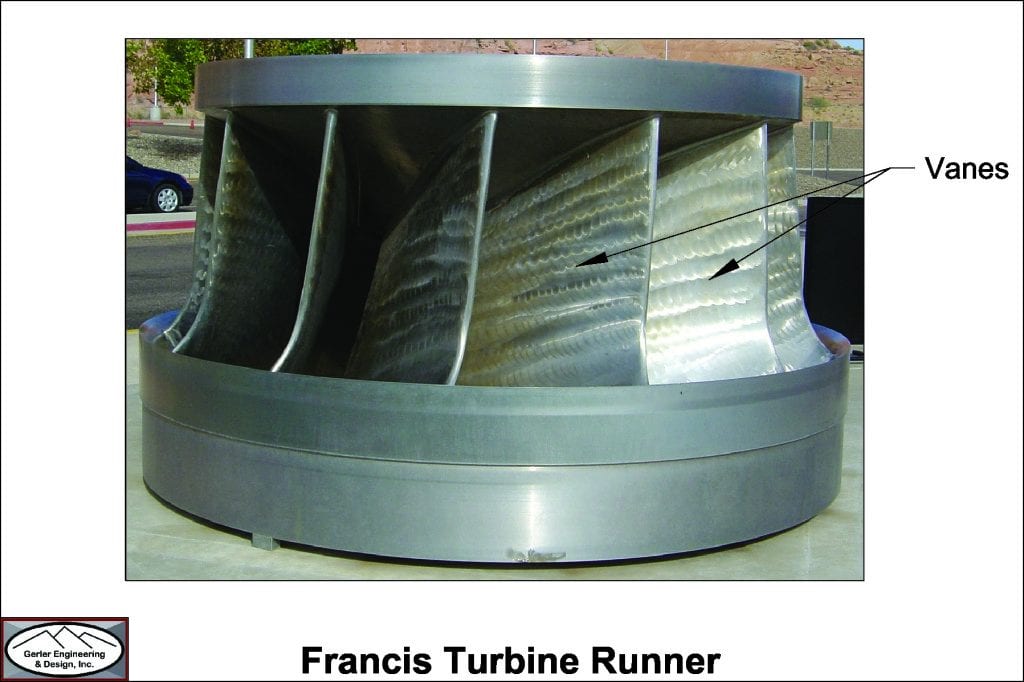 A Hydroelectric Turbine is a Hydraulic Turbine used in an Electrical Power Generation application.

Institute of Electrical and Electronics Engineers.

IEEE Guide for the Application of Turbine Governing Systems for Hydroelectric Generating Units.

A Magnetic Pickup (MPU) is a type of Speed Sensor which is installed facing the outside diameter of a rotating gear made of Ferromagnetic Material. As each gear tooth passes the MPU tip, it cuts through the magnetic field and this creates an AC voltage sine wave in the coil of the MPU. The sine wave magnitude and frequency are directly related to the speed of the rotating gear. The frequency of this sine wave is an accurate indicator of the machine’s rotational speed. 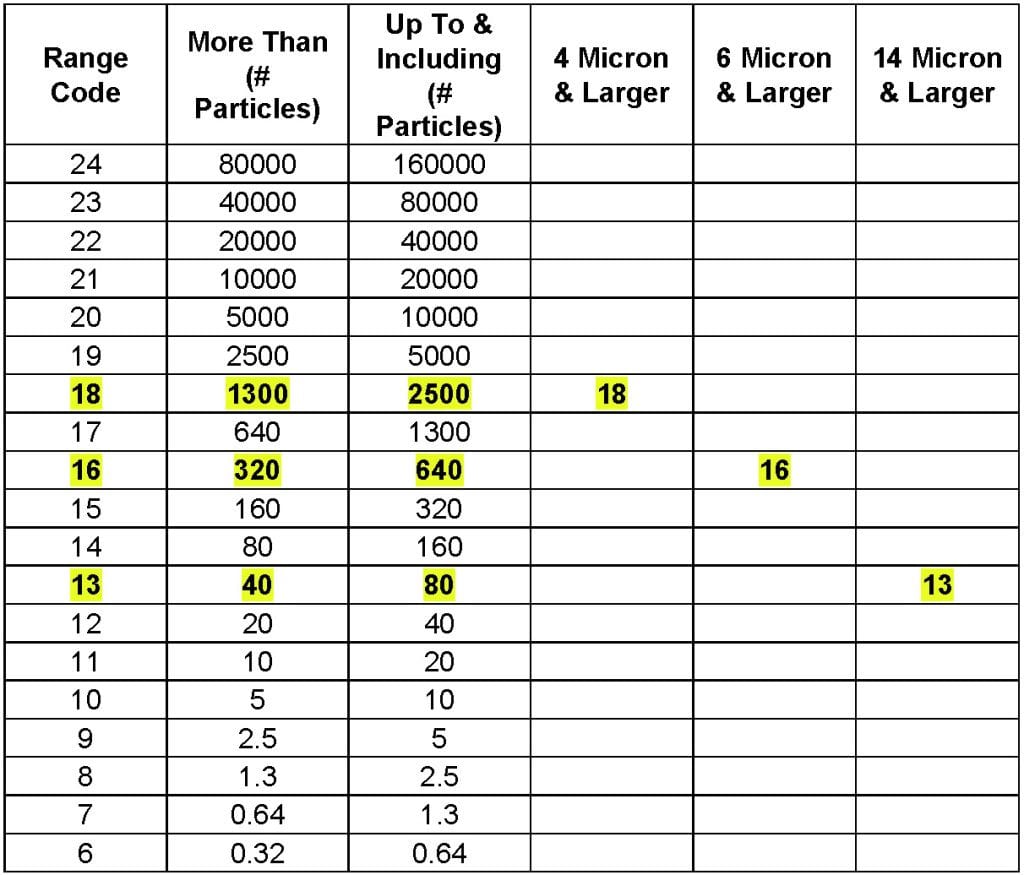 A filter arranged such that the full flow of an oil line is routed through the filter. Commonly used in Governor Oil Pump discharge lines, but can be used on other oil lines. 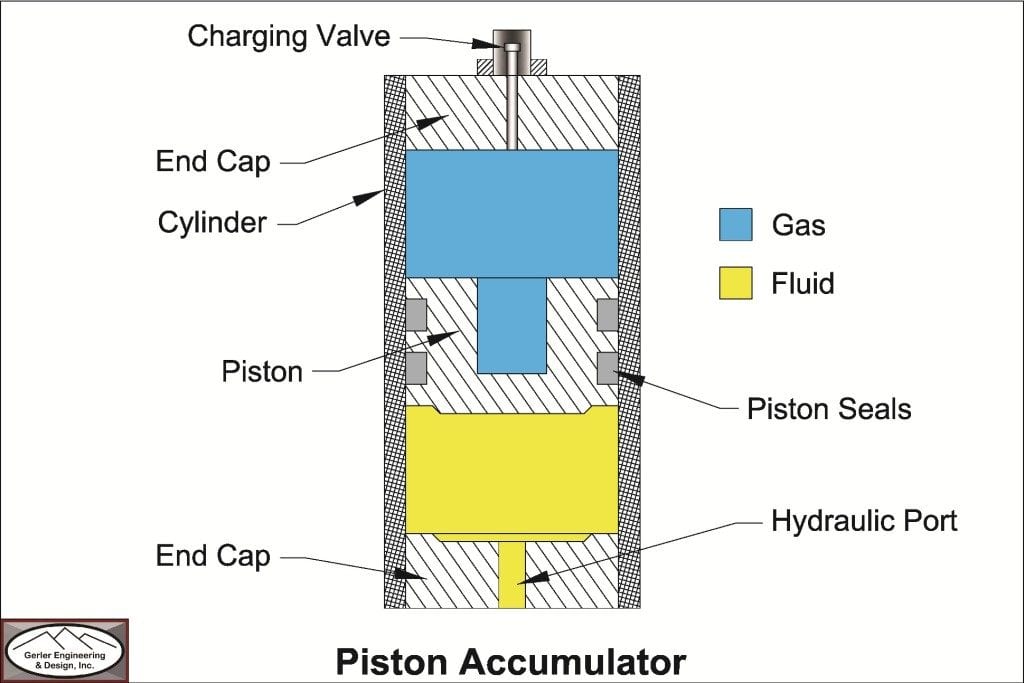 A Positive Fixed Displacement Pump is a Hydraulic Pump that causes a fluid to move by trapping a fixed (not variable) volume of fluid on the low pressure (suction) side, compressing the trapped volume and expelling it at high pressure at the Pump Outlet (Pump Discharge). Volumetric Flow increases in proportion to shaft speed (and corresponding Gear, Lobe, Screw, or Vane rotation). The Pump Outlet Pressure is dictated by activity in the Hydraulic Circuit that is receiving the Pump’s Discharge.

A Proximity Probe is a sensor that is used to detect the presence or absence of ferromagnetic materials. This type of probe is commonly used to determine the position of a mechanism component and also for Creep Detection and Speed Sensing.

Servo is commonly used as a abbreviated term for Servomotor. 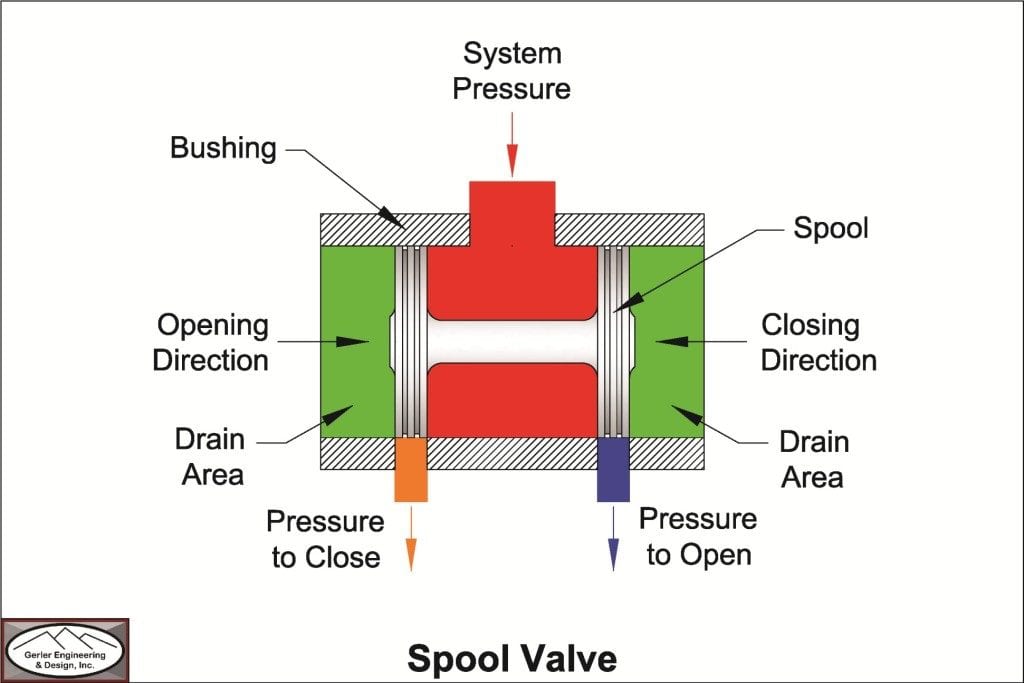 Stay Vanes are Fixed Flow-Directing Vanes between the Wicket Gates and Turbine Runner of a Reaction-Type Turbine. Stay Vanes are also often structurally important to the Scroll Case design.

See figure below. An Equal-Area Valve Servomotor has Equal Areas for the Pilot Pressure to act against on opposing sides. 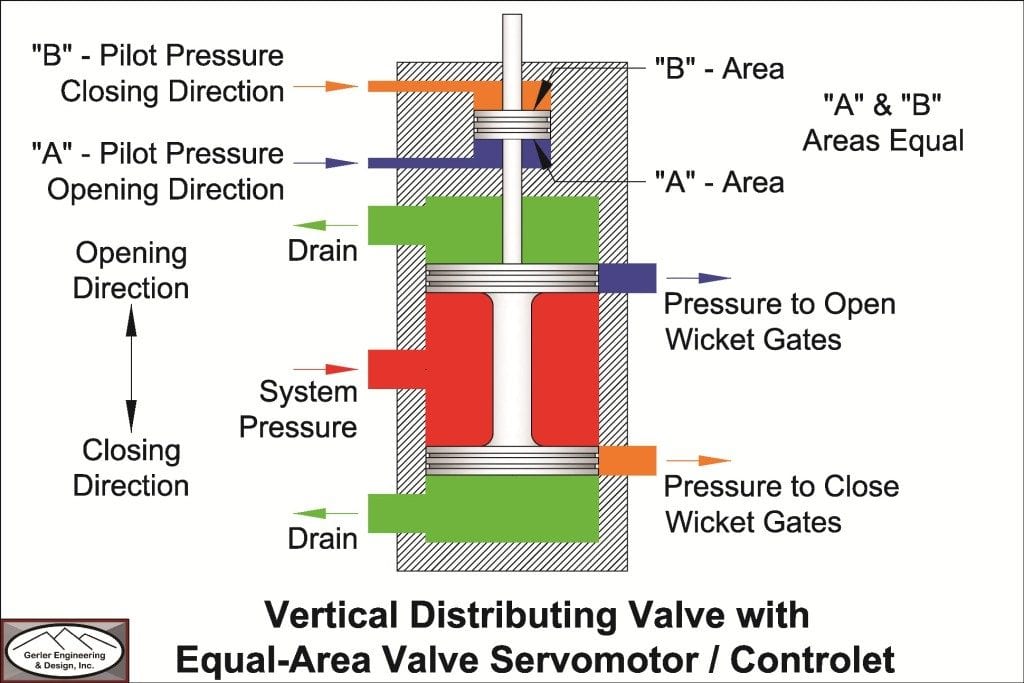 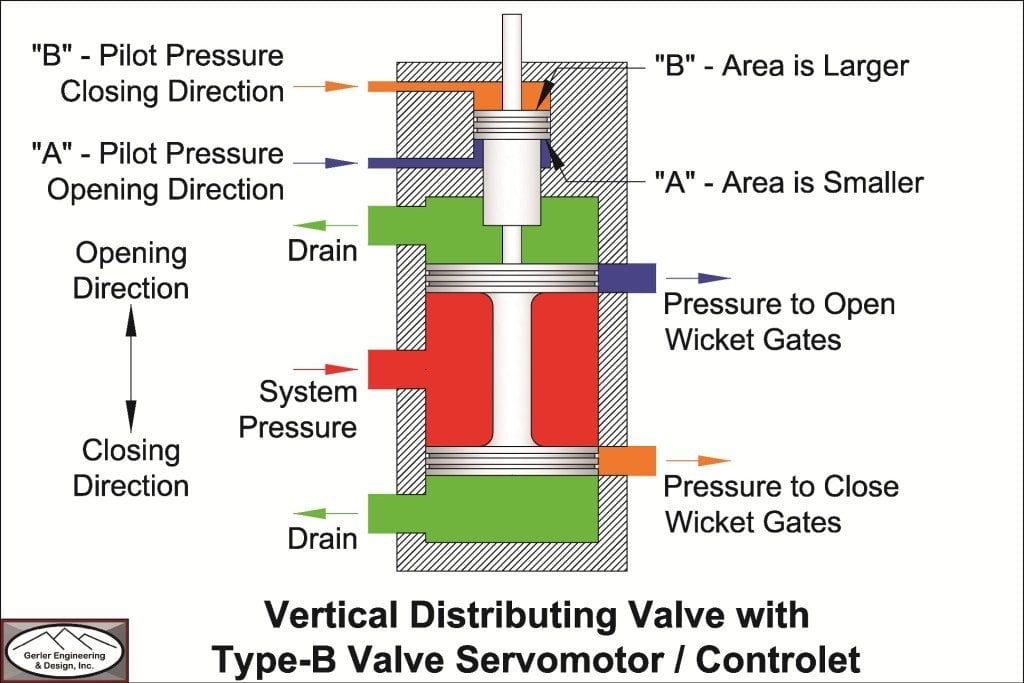 A Zero Velocity Pickup (ZVPU) is a Proximity-Type Probe that uses an Active Sensor to detect the presence or absence of ferromagnetic material. This type of probe is commonly used for Detecting Dead Stop, Creep Detection, and for Speed Sensing.